skip to main | skip to sidebar

LANDOVER, Md. -- Washington Redskins running back Clinton Portis was unable to practice Monday because of a sprained knee, and coach Jim Zorn said Portis is "50-50" for Sunday night's game against the Dallas Cowboys.

Portis' absence from a major game against a division rival would be tough to overcome. He's been the engine of the offense, and his primary backup, Ladell Betts, has missed the last three games with a more severe knee injury. Shaun Alexander, signed after Betts got hurt, has contributed little, and the other running back on the roster, Rock Cartwright, is heavily involved with special teams.
Posted by RobertoZeto at 5:58 PM No comments: 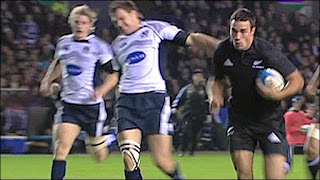 Scrum-half Andy Ellis has been ruled out of New Zealand's tour of Europe after suffering a rib injury during the 32-6 win against Scotland in Edinburgh.

Ellis came on as a second-half replacement for Piri Weepu at Murrayfield but lasted only 20 minutes.

All Blacks doctor Deb Robinson said: "A scan has confirmed he has an unstable rib and there is a risk of further injury if Andy continues playing."

Wellington's Alby Mathewson is likely to be called in as a replacement.

Earlier this season Ellis suffered another rib injury that ruled him out of this year's Tri-Nations.

He also had to overcome a knee cartilage problem, which he sustained during the latter stages of Canterbury's Air New Zealand Cup campaign, to make the trip to the northern hemisphere.

Ellis is the second player to have his tour cut short following hooker Andrew Hore's early departure with an ankle injury after the Test against Australia in Hong Kong.

The All Blacks play Ireland on 15 November, before facing Wales a week later and then England on 29 November.
Posted by RobertoZeto at 5:19 PM No comments: 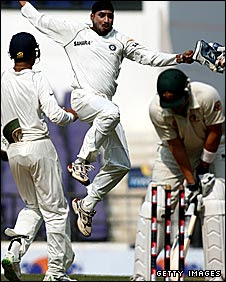 India lead the final Test at Nagpur by 86 runs after Australia were all out for a ponderous 355 late on day three. Simon Katich, resuming on 92 with his side 189-2, was dropped at slip but hit a second Test century before Zaheer Khan trapped him for 102 before lunch. The tourists took 354 balls to go from 200-300 and lost three wickets for 11. Mike Hussey was run-out for 90 and Cameron White hit a Test-best 46, but India look set to protect a 1-0 series lead at 0-0 in the second innings.
Posted by RobertoZeto at 5:45 AM No comments: 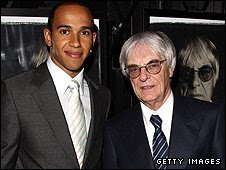 Formula One boss Bernie Ecclestone says he has cleared the air with Lewis Hamilton after seeming to make light of racist abuse aimed at the Briton."What happened in Spain because of those four guys, I'm sorry, but it hardly represents a nation of racists."I've seen some people having a pop at Bernie for trying to play it down, but what would you expect him to do? He is the ringmaster, the guy that has created this amazing foundation of business success that enables all of us to earn our pennies."We're all talking about Lewis being the first billion dollar sportsman, well that is on the foundations of what Bernie has created. To turn round and try to get Bernie to offer an apology to Lewis is just ridiculous."F1 may have many failings, but it does not come close to the racism you see in people's first love, and that's football."
Posted by RobertoZeto at 9:24 AM No comments: 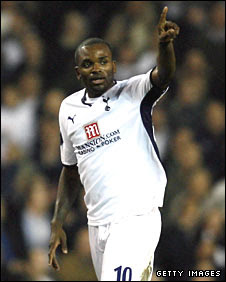 Rejuvenated Tottenham got their Uefa Cup campaign back on track as Darren Bent grabbed a clinical hat-trick against a hapless Dinamo Zagreb.

Bent blasted home in the 29th minute before calmly slotting in after Tom Huddlestone's pass three minutes later.Huddlestone then fired in a sweet long-range volley from David Bentley's accurate corner in the 58th minute.Confident Bent crashed in his third after 69 minutes before 16-year-old John Bostock came on to make his debut.By doing so, Bostock became Spurs' youngest player in a competitive game.
Posted by RobertoZeto at 6:13 PM No comments: